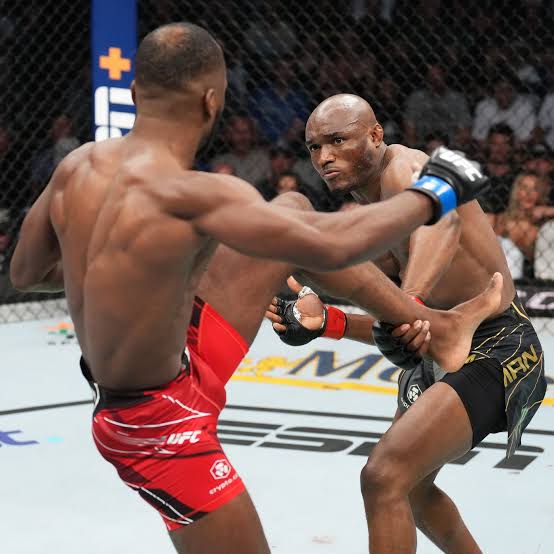 Usman and Edwards first locked horns back in 2015, with “Nigerian Nightmare” taking home a unanimous decision nod. Neither man has lost since that match up (Usman has never lost inside the Octagon, actually), with Usman capturing gold and Edwards amassing an impressive 10-fight unbeaten streak.

Both athletes have shown significant improvements in all areas of the sport since that showdown seven years ago. Now, the question becomes whether Edwards’ improvement has out-paced Usman because he was soundly controlled all those years ago.
Ultimate Fighting Championship (UFC) returns to Vivint Arena in Salt Lake City, Utah, on Sat., Aug. 20, 2022, for the first time in more than five years, headlined by a blockbuster Welterweight championship bout that will see Kamaru Usman run it back with No. 2-ranked contender, Leon Edwards. In UFC 278’s pay-per-view (PPV) co-main event, No. 4-seeded Middleweight contender, Paulo Costa, aims to spoil the return of former 185-pound champion, Luke Rockhold. And last but not least, former Featherweight champion and all-time great, Jose Aldo, returns to Bantamweight action, too!

Then it was time for the dominant champion to head to the Octagon — in the only way he knows how — and get squared up:

Usman crawled out of his corner into the center of the Octagon and we were rolling. Edwards tried a kick, which Usman caught, but he didn’t catch the next one. Low inside kick from Edwards as Usman stalks him into the various corners of the cage. More low kicks from Edwards as he circles around the perimeter. Usman finally caught up to him and was able to mash him into the floor, but Edwards was able to get back to his feet rather quickly. Usman still had standing back control, tenderizing Edwards’ hamstrings with a steady does of knees. Then, suddenly, Edwards flipped the script in a burst, reversing position and landing in full mount for the first time ever inside the Octagon. Edwards took his back and sunk in a tight body triangle and he hunted for his throat. One minute to go and Usman was in big trouble, desperately fighting the wrists of Edwards. He ended with a nice side-to-side flurry. Huge round for Edwards.

Usman came out with purpose in the second stanza, looking to control the fight and get things on his terms. He started to open up along the fence, but Edwards acted as if it was no big thing. circling out of danger after blocking several hard shots. Two minutes in and Edwards accidentally poked Usman’s eye, requiring a brief stoppage. Low kick from Usman, as Edwards’ switches stances to keep the champion constantly guessing. Big left hook from Edwards in Usman’s ear, then a solid knee up the middle moments later. Usman kept barreling forward though, eating two shots just to land one and get his hands on the challenger. Edwards circled out, then dove in for a single-leg takedown, which Usman stuffed. The pair clinched after a scramble, with Edwards getting backed into the cage and drilled with a standing elbow. Usman eventually scored a nice takedown, riding Edwards the final 30 seconds. Nice round for the champ.

High kick from Edwards, which Usman blocked. Usman faked a takedown, but Edwards didn’t bite. He landed a nice inside kick and a jab as Usman continued to pressure him along the fence. Usman grabbed him and threw him to the floor, but Edwards was able to get back to his feet. Usman was able to tenderize the hamstrings again for about a minute until Edwards was able to break free. He fired a nice one-two combination, with Usman responding with another takedown. He laid on top of Edwards for about a minute, the crowd growing restless. Edwards was able to get to his butt, with Usman looking to use the position for a guillotine choke. Edwards defended until the round came to a close.

Into the championship rounds we go, with Usman likely up one round on the official scorecards. Edwards missed on a huge left hook, perhaps feeling the pressure to mount a more considerable offense. After a failed flying knee, Edwards used Usman’s momentum against him to get him pressed up against the fence. Usman grabbed the fence to remain upright before Edwards eventually set him free. And that turned out to be a big mistake, with Usman scoring a huge takedown seconds later and getting into Edwards’ guard. He scooted to the cage, was able to get on his knees, but Usman remained draped over his back like a wet blanket the entire time. With 90 seconds to go he actually got to his feet, but Usman was locked on and wasn’t letting him go, excitement be damned. Edwards was able to break free, but he used the fence and that’s illegal. So, referee Herb Dean put them back in position and that’s where they stayed until a frenetic few seconds at the buzzer.

Edwards’ corner begged him to come up with a fight-ending plan between rounds. Usman bounced a jab off his forehead, then a few upstairs, before scoring a flash takedown along the fence. Usman with some foot stomps, and not much else, as the pair grappled along the cage. Finally, mid-way through the round, Dean separated them and put them in the center of the Octagon. On the restart, Edwards landed a nice right hand and a kick to the mid-section that briefly paused the action. Edwards with some nice low kicks, but no sign of urgency as the seconds melted off the clock. And then, out of nowhere, Edwards connected with a left high kick that slept Usman. HE WALKED IT OFF!!! LastKobo.com.ng