European governing body UEFA announced the winners of the Player of the Year and Coach of the Year awards for the previous season.


Last year, Chelsea's Jorginho won UEFA's men's Player of the Year award for 2020/21, while Barcelona's Alexia Putellas won the award on the women's side.


Karim Benzema was the frontrunner for the men's award, and he took home the title, bringing him one step closer to his expected triumph in the prestigious Ballon d'Or on Oct. 17.


The Real Madrid forward was incredible last season, scoring 42 goals between La Liga and the Champions League, leading his club to a famous double.


In past years, UEFA has also presented individual position-specific awards, with the Best Goalkeeper, Best Defender, Best Midfielder, and Best Forward recognized. However, UEFA confirmed to The Sporting News that those awards have been scrapped. It is not immediately clear whether those awards have been eliminated permanently or just for this season.


There are three nominees for the men's and women's Player of the Year honors.

UEFA Men's Player of the Year: 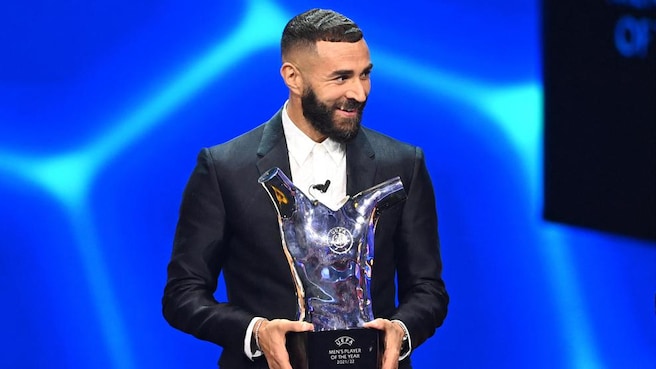 
The Real Madrid striker was the runaway winner of this award, leading all Champions League scorers with 15 goals en route to another European title, giving him 42 goals total between the league and continental competitions.

With the World Cup coming and the French national team calling, Benzema is in top form. It's expected that the 34-year-old will follow this award up with the Ballon d'Or, to be handed out in mid-October.


UEFA Women's Player of the Year: 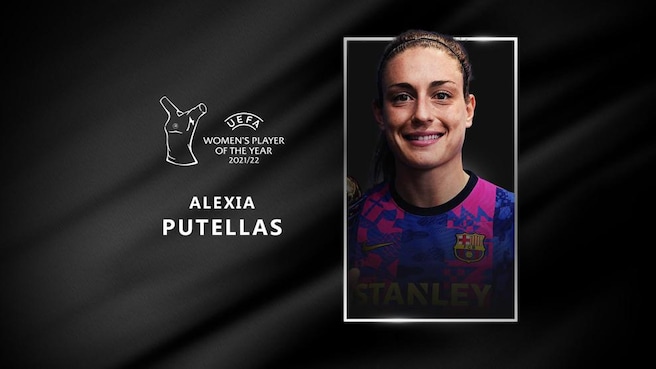 
Before agonizingly going down with an ACL injury just before the Euro 2022 tournament, Alexia Putellas has risen to the top of the world football game. The defending Ballon d'Or winner, Putellas has pushed Barcelona to new heights.

She led Barcelona to the Champions League final this past summer, and scored 18 goals with 15 assists in La Liga last campaign while helping the Blaugrana to a runaway title.


Leading Real Madrid to the club's record 14th Champions League crown en route to a domestic & continental double, Carlo Ancelotti remains one of the best coaches in all of world football.


Ancelotti is the only coach in history to have won four Champions League titles, twice with AC Milan and now twice with Real Madrid. He also previously won the competition twice as a player with AC Milan.


Nicknamed "Don Carlo," Ancelotti engineered a pair of incredible second-leg comebacks route to last year's Champions League title, first downing PSG 3-2 on aggregate after falling behind 2-0 by halftime of the second leg, before sending Man City home 6-5 on aggregate after a 4-3 first-leg loss.


The Men's Coach of the Year award was previously known as the European Football Coach of the Season award, which ceased to exist in 2016. The award was revived in 2020 for the UEFA Best Of awards.


Women's Coach of the Year: 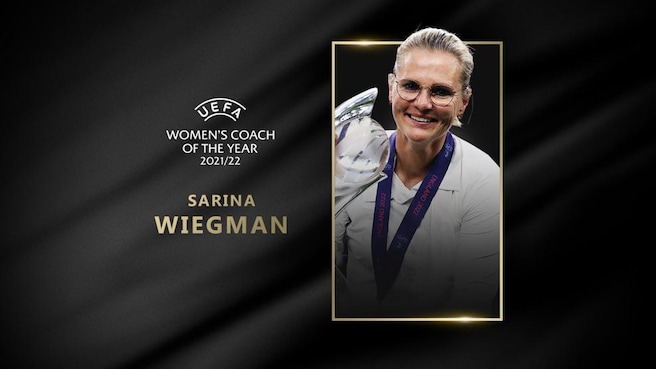 
The coach of the England national team, Sarina Wiegman wins this year's Coach of the Year award. The 52-year-old only joined the national side in November, and led England to the Euro 2022 crown. She has yet to lose a single match with England, with 18 wins and two draws.


A former midfielder for the UNC Tar Heels and owning 99 caps for the Dutch national team, Wiegman took charge of the Netherlands for four years before joining England.


UEFA has a technical committee that picks the 10 best goals of the season across all UEFA league and cup competitions.

Once the 10-goal shortlist is created, UEFA's Goal of the Year award is then split into two awards. One is selected by the technical committee, while another is voted on by the fans.


Karim Benzema's hat-trick against Chelsea in the Champions League semifinal helped set the stage for Real Madrid's charge to the title.


The 3-1 first-leg victory, inspired by Benzema's hat-trick, saw Madrid return home to seal the deal and secure a place in the final.


Benzema's first was the best of the bunch, a header from just beyond the penalty spot that left goalkeeper Edouard Mendy no chance. The delivery from Vinicius Jr was just slightly behind the French striker, but Benzema managed to contort his body perfectly to deliver a long-distance headed strike.


Thiago's low driven strike in the 2-0 win over Porto in the Champions League group stage won the fan vote for best goal of the 2021/22 season.


The UEFA President's Award is handed out to recognise achievement, personality, and other qualities throughout European football.


As per the official UEFA award description, the President's Award is given to those with "outstanding achievements that transcend the sport."


Last season, Denmark national team captain Simon Kjaer received the award, along with the pitch-side medical team during Denmark's opening match in Euro 2020 at Copenhagen Stadium. They were recognised for their actions in saving the life of Christian Eriksen, who collapsed during the match and was revived on the pitch.


This year, the award will be presented to Italian coach Arrigo Sacchi, who led AC Milan to the 1987/88 Serie A title as well as back-to-back European championships in 1989 and 1990.


"While Sacchi never played top-flight football, he was always an exemplary student of the game," UEFA president Alexander Ceferin said in the official UEFA release read.


"Sacchi reinvented the ethos of teamwork, which transcended to pure harmony on the pitch. Perfect synchronisation and a winning mindset, irrespective of whether they were playing at home or away, felt almost supernatural back in the 1980s. That is precisely what divides excellence from greatness." LastKobo.com.ng